It was my birthday and we were headed for Mobile, Alabama. “There’s a Carnival cruise ship there,” my husband, Wendy, said. “I hope you brought your passport.”

“I bet you got a good price,” I teased. This was Day Two of my five-day sixtieth birthday celebration and each day was a surprise. Wendy would come to a corner or fork in the road and I would watch anxiously to see which way we went, adjusting my guess based on the turn. I was having a blast.

At about eleven in the morning, he steered the VW into a truck stop for a restroom break. Or so I thought. He didn’t get out of the car, but instead handed me an envelope and said, “Here. This is your birthday gift.”

When I opened the card, I cried out with joy and gratitude. Inside were two tickets to the local production of To Kill a Mockingbird that Monroeville, Alabama residents put on each year.  Monroeville is the home of reclusive author Harper Lee and the prototype for much of the book–her only work and my very favorite book/movie.

I have read the book a handful of times, but I have seen the movie too often to count. As a conflict resolution teacher, I used clips from the film to show how Atticus would get spit in the face by Bob Ewell, wipe his face and walk away–not in fear, but in courage. Never did I have a middle schooler call Atticus a coward; they all recognized his dignity and valor. And when the black townspeople at the courthouse rose in honor of Atticus after he defended Tom Robinson, tears never failed to fall from my eyes. (During my singe days, I often said I’d like to marry Atticus.)

We drove the twenty miles to Monroeville and had a look around. The Old Courthouse Museum was where Lee’s father, the model for Atticus Finch, practiced. This courtroom was studied and measured by set designers, then re-created in Hollywood where the movie was filmed. Stepping into the actual room was magical.

While we looked around, one of the curators asked Wendy if he would like to be on the jury for the evening’s performance. They chose only white men for authenticity. “Do it!” I urged. This could not get any better. Imagine him behind Gregory Peck, looking stern and disgusted with Tom Robinson.

I climbed into the balcony and crouched where Jem, Scout, and Dill watched the trial with Reverend Sykes and the rest of the “colored” community. 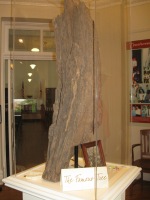 Outside the courtroom, encased in glass, is what’s left of the tree that grew in front of the real-life Radley house. This was as close as falling into a rabbit hole and landing in 1930’s Maycomb, Alabama, as one can come. My whole body buzzed with excitement.

In the evening, we sat outside the courthouse for the first act. An amphitheater has recently been built where pre-trial scenes are enacted.

After that, the court clerk and Sheriff Heck Tate announced those selected for jury duty. Wendy and the others headed in the back way and I found a seat on the jury side of the courtroom, second bench back. Right behind me sat “Miss Maudie” and “Miss Stephanie” who whispered their gossipy comments throughout the play. Only those within a couple-foot radius could hear them. It was so cool!

Many of the local actors are related to, knew, or knew of the actual people the book was based on. I was very impressed with the talent of these volunteers, who have even taken the production around the world.

Atticus Finch, although fictional, is an American hero. In Monroeville, the Alabama State Bar erected a memorial to him, calling him a “lawyer-hero.” The American Film Institute named him the greatest film hero in the last 100 years. Over the last fifty years, this novel has affected people throughout the world the way it has inspired me and I was privileged to feel a part of it.